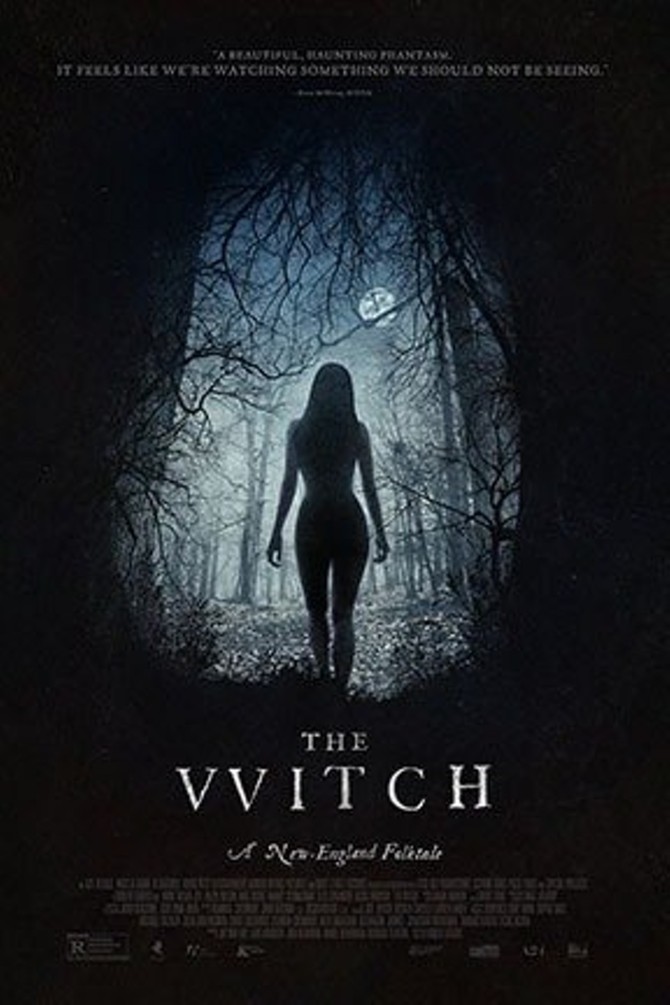 When faced with evil, our response to it says more about us than any danger alone does. In 1630 New England, a man and his wife and children are banished from their plantation by a Christian court for crimes not fully specified. Exiled to a green yet bleak wilderness, the family rebuilds their life as best they can, looking to God when everything around and within them falls apart. The “VVitch” is–for the most part–a darkly believable and in some ways disturbingly familiar portrayal of what happens when an external threat is resisted by extremism, with few clear heroes and fewer solutions. As a story, and as a piece of entertainment, the film isn’t much to speak of; its subject matter, however, remains deeply unsettling and may stay memorable longer than the movie.

The witch will not suffer you.

William and Katherine are seen praying with their children. The ghastly chorus in the background swells as the camera focuses on trees. With no clear threat, musical strings rise to a crescendo that’s more annoying than scary to be so early in the movie, like the Joker’s rising note in The Dark Knight would have been without a story to back it up. Regardless, the film moves along very steadily: the young Thomasin recites her prayer of penitence, her mother breastfeeds a baby, and the family tends to what few crops they have. The prayer scene is interesting: instead of simply dwelling on the actor as some other films have done, the camera moves to other ordinary events to maintain the audience’s attention until the girl can finish speaking.

The family has few joys, but the teenage Thomasin (the focus for much of the film) delights in playing peak-a-boo with her youngest brother, Samuel. In the time it takes to uncover her face, however, the child has disappeared. The reaction scene is done well: the audience glimpses Thomasin’s utter fear before discovering what’s happened, and she runs into the forest. There’s no clear evidence as to what’s happened, so without an animal or indeed a witch to blame at this point, the film’s atmosphere builds its foundation on very real fears and concerns, such as those of losing a child.

The slightly younger stares at his sister Thomasin’s developing breasts (tactfully presented, though in one scene he seems to impulsively fondle her) as she sleeps, and when she stirs, he coaxes her back to sleep–probably more creepy than the movie intended in the age of Josh Duggar-style scandals. In terms of characterization, Caleb’s most noticeable attribute throughout the film and his biggest weakness is a budding sexuality he scarcely dares even mention in such a harsh culture. It’s hard and empathy-demanding to watch this character struggle with his otherwise ordinary desires (despite their strange manifestations) without a clear mentor or example to guide him. As for the family, the Gospel may as well be “good news” only in name, with its sole joy being the avoidance of hell and damnation. William soon gives up on finding his son Samuel. The family’s corn is rotting, and he’ll have to hunt for food. Katherine sobs in prayer, her anguished expression implying self-blame for all that’s happened.

The presentation of faith throughout the story is more focused on genre fear than on theological depth for the audience to scrutinize. Christianity is portrayed as being an odd mix of panicked, irrational, and thoroughly justified in the film’s own morbid way; Caleb, in his young piety, asks heartbreaking questions well beyond his age: what was Samuel’s sin, that he should die? How can Caleb himself avoid hellfire? William, the father, himself does not know how to reach the joys of Heaven, and his and Katherine’s doctrine is one that barely has any assurance of Christian salvation. While his trust in God feels unshakable, Katherine thinks God has cursed the family. It’s well worth noting that the acting from young and old throughout the movie is very convincing and remarkably well done, with even the tiny children’s ages and their outdated form of English never getting in the way.

But you surely will suffer.

William is a devoted, yet flawed, yet accountable parent, and his actions strain the trust of a sometimes dysfunctional family clinging to what little hope it can find; life here is endless toil, with little warmth or happiness, and as food runs low, the patriarch leads the family in prayer over a meager dinner. One of his statements can tragically be interpreted that he fully expects himself and his loved ones to starve, and that he welcomes this as a freedom from their earthly pain and misery. While the film’s “standard” horror elements such as the soundtrack and the actual culprit don’t always work well together or alone, The VVitch’s most terrifyingly convincing moments come from watching threats both real and imagined drive an imperfect but undeserving family against one another. It’s believable watching parents yell so loudly that they wake even their youngest children. It’s believable seeing them argue over fixing their ailments with a radical “solution” that would further devastate their family. It’s more upsetting (even if briefly) to watch siblings cry from sincere concern for one another than any monster or serial killer would be in itself, and the movie is at its best when it showcases its characters reacting to extraordinary circumstances in very familiar ways.

A silly anecdote with an odd punch line makes for a big red herring in a movie like this, but it provides an insight into a formerly happy life. As Caleb finds himself in danger and begins to pray, the story becomes scarier than the presentation values are. Just as The Exorcism of Emily Rose did before it, The VVitch struggles as a convincing horror movie but tells a deeply interesting story, even if it’s thin in this case and somewhat underdeveloped. [mild spoiler] He and the audience finally meet a woman who is very blatantly dressed as a stereotypical witch, red hood and all; her introduction feels inappropriately silly, though it’s also possible her buxom appearance preys on Caleb’s own fear of his sexual desires. That theme is really this scene’s scariest aspect, give the characters’ massive age difference. [end spoiler] 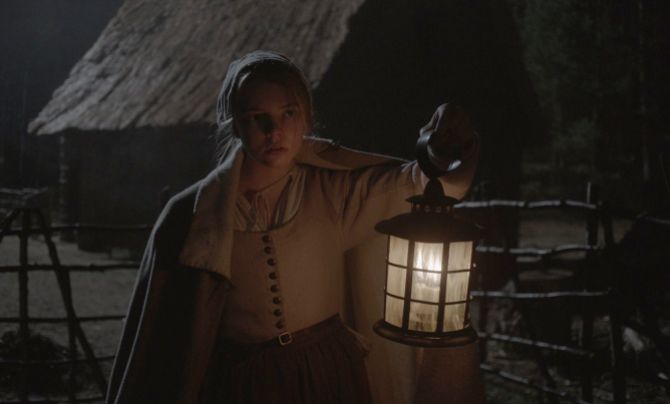 As the story becomes bloodier, sometimes even without violence involved and at least once because of a weird rite, its horror presentation values become more focused: Caleb contracts what looks like a severe fever and amid his convulsions begins yelling out various prayers. Other family members do the same, but since they’re effectively praying against whatever natural or supernatural influence is possessing him, it adds up to a polished version of the discord the movie’s beginning had attempted. Strangely, Caleb makes a Song of Solomon 1:2-shaped (“Let him kiss me with the kisses of his mouth”) plea toward Jesus Christ. It feels like an odd reference for such a young boy to be familiar with, particularly since he has no other apparent guide or outlet for his natural romantic urges.

The cynicism becomes stifling–necessary, but hard to watch–late in the film as witch accusations begin flying left and right and family ties begin collapsing. One weird scene that could be a dream or hallucination leads to probably the only genuinely gross jump scare in the whole film. The gore at this point becomes intense, more often from context than quantity alone, but to its credit it never feels random or thrown-in. The movie places its central family in increasingly tragic situations where their faith is continually portrayed in a harsh light, but it also validates their concerns to the point where fanaticism is basically their best option for physical and relational survival. The scariest thing in this movie isn’t an actual witch, or the possibility thereof, but the intense fear thereof that drives families, children, neighbors, lovers against one another.

Conclusion: When you believe in things that you don’t understand

The VVitch is a worthwhile film that’s somewhat divided against itself: it wants to be entertainment, but with its shallow treatment of a provocative subject and horror scenes that don’t really start to feel as convincing as they should be until the film’s second half, it excels less at being a work of art than, rather, being a potential mirror for our own questionable beliefs and fears and what they might potentially lead us to do to others who deserve our trust. As such, the film feels similar to the second half of Noah, if it were simplified and stretched to feature length.

The performances usually are top-notch and make the most of the film’s limited plot, even if the story won’t reinvent the witch/demon genre and–because of the way it ends–doesn’t seem to overtly make a “point” for good or for ill about religious culture then or now. The setting feels convincing in its own way, and the screechy horror soundtrack becomes more appropriate upon learning time and place. The stars of this film, however, are the character actions that range from the beautiful and the sweet to the very, very ugly, and those do more to evoke audience empathy than any movie monster would be expected to.

This post was originally written and published for my movie-review blog, Projected Realities.