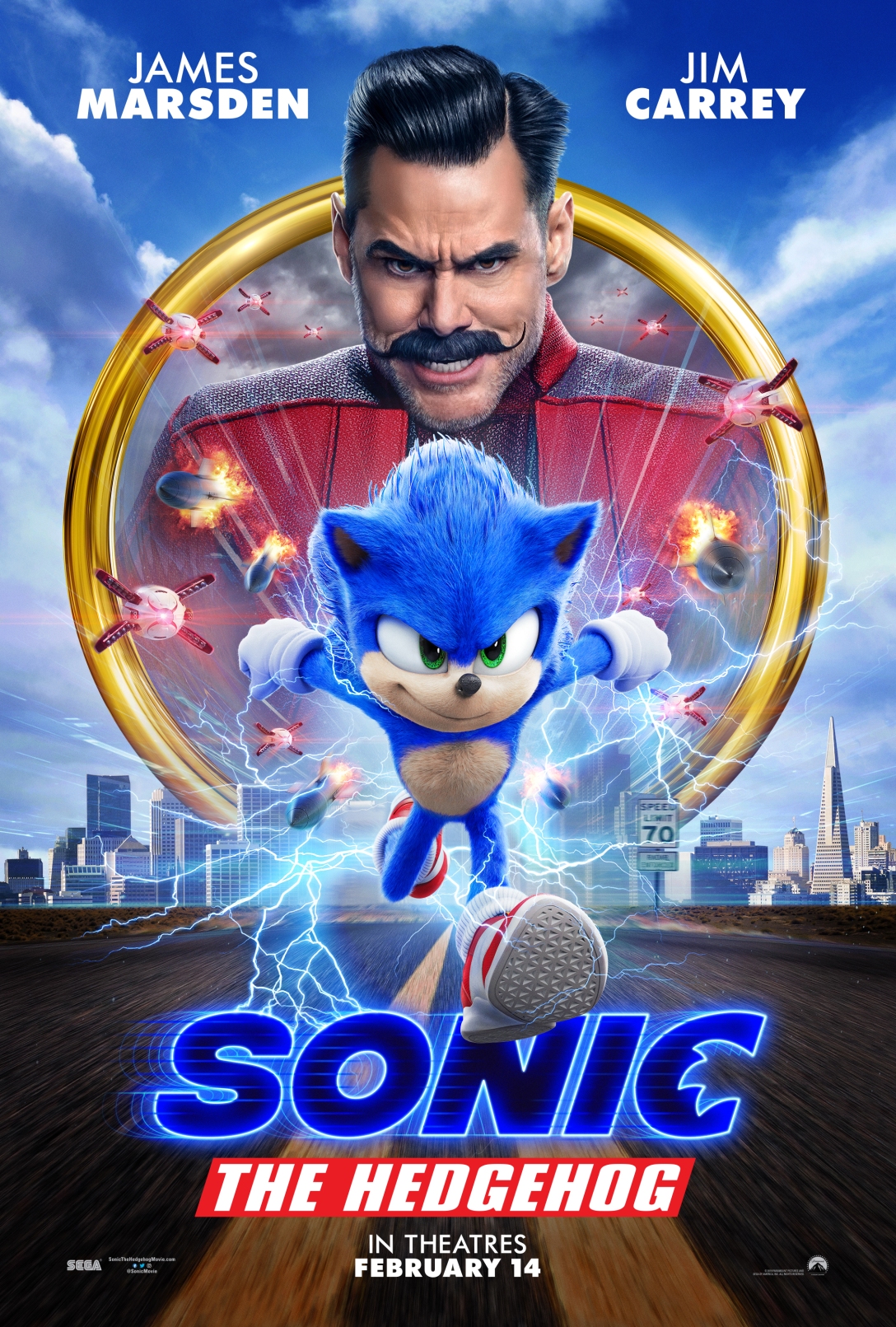 Sonic the Hedgehog is the sort of “children’s movie” that earnestly suggests that a valid way for a kid to learn to make friends is to spend an hour in a bar, and indeed a noticeable chunk of the film takes place there. Despite some infrequent but severe pacing issues, that huge non sequitur being one of them, the film is remarkably enjoyable and overflowing with energy—when it decides to remain on topic. Releasing a live-action film nearly thirty years after its progenitor’s heyday was a dubious decision at best (Ratchet & Clank’s gap was half that long but still felt very dated), especially for a series whose labyrinthine mythos extends among multiple animated series and comic books and is mostly ignored here, but while Sonic’s origin story is made up almost entirely without pre-existing material, it’s a familiar and amiable story that does a reasonable job of earning its cliches amid some excellent action scenes and a lot of age-inappropriate humor.

To its immense credit, the film wastes no time getting up to speed, and does it ever: The beginning of the film is an exciting, frenetic chase between the heroic Sonic and the megalomaniacal Doctor Robotnik, whose plans to use Sonic’s biological capabilities for domination are vaguely defined but are plenty of excuse for a perfectly cast Jim Carrey to ham up every ounce of screen time he gets. The in medias res presentation’s strategy pays off, exciting and near-exhausting the audience before beginning its exposition dump: Sonic hails from a planet where all he does is run all day, complete with terrain that heavily resembles well-known areas from his original video games, but enemies quickly overwhelm his mentor (an owl named Longclaw) and nearly do the same to him before he is transported to a strange land called Earth, with little to his name besides the bag of magic, portal-creating rings he was entrusted with.

Sonic’s previous lack of social obligation is a double-edged sword, granting him near-infinite freedom to live his life as he pleases but cursing him with a crippling loneliness, which the film harnesses toward several elaborate scenes of him either talking to or playing games with himself (couch psychiatrist, table tennis, and even a baseball game complete with umpire). The bizarre juxtaposition of bursts of activity against an underlying, almost nihilistic loneliness that no one with Sonic’s level of undeveloped emotional maturity should ever have to struggle with, gives the film brief but surprising moments of poignancy: you can easily see the frustration in Sonic’s eyes as he runs to give his life meaning—which in turn creates an electrical blackout across the Pacific northwest.

Sonic has a chance meeting with police officer Tom Wachowski (an amusing coincidence since I kept thinking of the Speed Racer movie the siblings who share that last name directed a decade ago), a longtime resident of the fictitious Green Hills, Montana region who has received a promising opportunity with the San Francisco police force and grapples with whether to leave his close-knit community behind. A series of contrivances leads to Sonic’s all-important bag of rings disappearing into that city and Wachowski being pursued by dangerous enemies, forcing the two to establish an uneasy friendship. The film never explains why Sonic wasn’t simply given a map to San Francisco—he attempts to run there independently but does not know the way—but despite some overlong detours into family drama that often feel more cheesy than funny, the story makes its buddy-comedy dynamics work without shoehorning either of its leads into an exclusive “straight man” or “comic relief” role.

The foremost scene where the film’s writing shines the brightest is also its most conceptually inappropriate: as stated, about ten minutes of the story take place in a bar, complete with Tom and other characters either carrying or consuming alcohol (Sonic requests the same but is overruled with a soft drink), and the blatant glamorization of such couldn’t feel any more out of place than it does here. Aesthetically, however, this detour pays off in one of the movie’s most genuinely impressive moments: On several occasions, the film shifts to Sonic’s enhanced senses of perception, depicted as being so highly accelerated that time effectively stands still for him. During this particular instance, a surreal but creative and catchy musical interlude showcases Sonic constructing a goofy and childish but immensely complicated Mouse Trap-esque Rube Goldberg prank throughout the entire bar, while the camera moves among the frozen bar-scape in one fluid take—before Sonic’s prank, including one person being given an enormous wedgie by way of a stuffed animal’s head, triggers within seconds. Despite this whole scene being the crown among many, many moments that have no business for a young audience (Doctor Robotnik even references his “egg sac” elsewhere), the aesthetic presentation is easily one of the story’s best highlights and arguably justifies a ticket purchase all on its own.

The film juggles a discordant but humorous variety of settings, from a heartfelt if abrupt fish-out-of-water story to a clumsy but restrained romance (its twin leads are already married and mostly happy, which limits unnecessary drama) and to a Tom Clancy movie complete with dangerous-looking soldiers, vehicles, and weapons, but the transitions between moods make enough thematic sense even when the more mundane facets of the story aren’t very interesting. The romantic subplot deserves immense credit in not contriving an unneeded love interest for Sonic, but many of its scenes go on longer than they should in a film whose first third spends too much time without him. Much of the human acting feels excessive, especially in the early scenes where police officers’ mannerisms feel exaggerated in the way that characters in a children’s movie often do, but this is an immense asset for Jim Carrey, whose enjoyment of his villainous role is so abundant that at one point the film simply stops to let him dance inside his armored vehicle for several minutes.

It’s worth noting where the movie heavily diverges from its source material—in many early Sonic stories, Robotnik’s robots were created from enslaved animals; here, wisely, they’re simply drones to be destroyed without ethical consequences, and Sonic frequently does so in displays that wouldn’t be out of place in a superhero movie (he’s shown to be a fan of The Flash). Speed is the film’s best asset, reflected in a mostly brisk running time and in a superb sense of motion, and indeed the hyper-charged action sequences and especially the finale are astoundingly presented as Sonic rapidly transitions among numerous locales and settings. Despite some irresponsibly dangerous decisions on Sonic’s part, he and his newfound friends conclude their stories satisfyingly.

The film’s humor is filled to the brim with questionable topics, with the expected “potty humor” paling in comparison to random or unwanted references to breastfeeding, a colonoscopy, divorce, a man’s scrotum as mentioned, alcohol and drunkenness, property theft played for laughs, and even child kidnapping and endangerment … also presented as humorous. The action generally shouldn’t be too intense for young viewers, outside of one brief scene where a man’s house is riddled with bullet holes and several instances where a character is repeatedly implied to have sacrificed their life, but one early and rather wasted scene involving Sonic’s mentor may prove upsetting in part due to its dramatic music. Language is relatively restrained outside of a censored “son of a—” and some vain references to God and “baby Jesus,” but it does miss an easy “Ro-butt-nik” joke in light of the 1990s cartoons. Despite the film keeping its references to other movies and pop culture near a minimum, several jokes about Olive Garden come across as blatant product placement. The movie does make occasional but delightful references to some of its fan base’s most famous running gags.

Outside of its often startling content issues, however, the film excels at its primary attractions once it gets its story’s foundation established. As a mascot film, its premise isn’t as peculiar as last year’s stunning Detective Pikachu film: while this may make Sonic’s story more accessible for an unacquainted audience at the expense of world-building detail, Pikachu’s exquisitely elaborate setting brought intrigue and curiosity even to its quietest moments, which Sonic can’t quite muster here outside of its fervent action sequences. That said, the movie packs a number of genuine surprises into its camera and music choices that prove to be more exciting than watching scenery blowing up, and there’s one especially brilliant pun regarding a certain song choice that’s so understated as to arguably be unintentional. Sonic the Hedgehog wouldn’t quite be the pinnacle of its genre even if its humor didn’t continually sabotage it, but it’s an enjoyable if thinly written journey that’s often as weird as it is predictable.

(Stay for the epilogue.)

Image sources, property of Paramount Pictures, Sega, and others

This post was written and published for my movie review blog, Projected Realities.